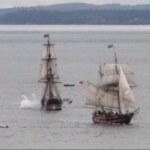 In early California, people often raised the wheat, stored it, ground the wheat grains every day that they wanted to make bread, and baked the loaves in outdoor ovens. What a lot of work! During this current pandemic, everyone started cooking and baking. Making bread became so popular that I heard the bread-making appliances were in short supply! Years ago, I made bread so I decided to try to bake bread again. With very few places to go to these days, being indoors and waiting for the bread dough to rise was no problem. A really good rise (without a bread machine) can take seven hours! Many people leave the dough to rise overnight, which I imagine many early pioneers did. In Alta California and other Spanish colonies, the bread was baked in adobe clay beehive-shaped ovens, built outside the main dwelling to avoid house fires.

Highly contagious diseases such as smallpox, syphilis, mumps, influenza, and measles were prevalent in California during the 1800s. Europeans were learning to control outbreaks of the deadly disease smallpox by vaccinating. However, when the Spanish and Mexican soldiers mixed with the Native Americans in California, epidemics of smallpox and measles spread rapidly through the native population. The people had no immunity to these European diseases, and though some survived, many died within days after contracting them. Captain Richardson helped the Franciscan friars vaccinate for smallpox among many of the neophytes who had been at the California missions, but smallpox and other diseases returned, again and again, to cause havoc among the coastal people, resulting in severe suffering and death. In the Franciscan Mission Dolores (located in San Francisco), where on average 1,000 neophytes lived and worked, more than 300 might die in one year due to these diseases.