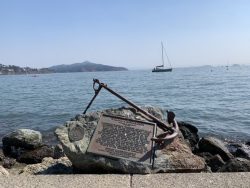 Actually there are two memorials to Captain Richardson’s life. A plaque listing events in his life is found on a sidewalk near the Sausalito harbor docks. I lived in Sausalito for a while and yet never noticed this marker. Linda H., a dear friend interested in my writing, discovered it. Another marker honors Captain Richardson’s memory in Gabrielson Park near the Sausalito Ferry terminal. Two of the captain’s descendants from his daughter Mariana Richardson Torres, Davis Lewis and his sister Letitia Davis, attended the 1999 dedication ceremony for the monument. The memorial is fitting especially since Richardson’s gravestone, somewhere on a San Rafael hillside, can no longer be found. These two markers are important reminders of Captain Richardson’s life and work on San Francisco Bay. Many thanks to my niece Liz Lowry for the photograph of the anchor and marker. The beginning of the inscription on the plaque reads:

In 1822 English-born Richardson arrived in San

Francisco Bay on the whaler Orion.

I won’t quote the rest of the text on this tribute to Richardson because it contains spoilers. I would rather you read my book when it is published to discover the whole story about this remarkable and somewhat forgotten man and his courageous family.

One Reply to “Where in Sausalito, California, is the memorial dedicated to Captain William A. Richardson?”