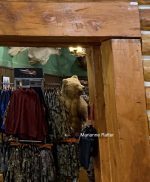 News articles recently reported that a person is serving time in prison and paying fines for approaching too close to a grizzly bear and her cubs in Yellowstone National Park. All park visitors are warned about the dangers of approaching any of the wild animals and given specific distances to stay away from them. For grizzlies, you are told to keep 100 yards (that’s 300 feet! 91 meters!) between you and them. If you are closer and a bear decides to chase or attack you, you will not get away. These bears can run up to 40 mph, a lot faster than any human. They can run up and downhill, swim, and also climb trees although because of their long, curved claws, not as good as black bears. Males can weigh up to 700 pounds and females up to 400 pounds. A large male standing on his hind feet might be seven to nine feet tall. Not something you’d want to wrestle. I read that even though millions of people visit Yellowstone each year, records kept since 1892 show only 16 people were ever killed by bears.

When I visited Yellowstone National Park, I was thrilled to observe so much wild life up close. Some of these animals can still be seen in California but not in such numbers as in the past. Huge populations of elk, deer, black bears, wolves, and grizzlies once roamed the hills and valleys of California. Some such as wolves and grizzlies are gone forever.

In 1846 American settlers in Alta California rebelled against the Mexican government. They chose the grizzly as a symbol for their flag because the bear never backed away from a fight. These rebels became known as the Bear Flaggers. When California joined the United States, the rebel flag with the grizzly was adopted as the state’s official flag. The grizzly still flies on the state flag even though the last California grizzly bear was shot in 1924.